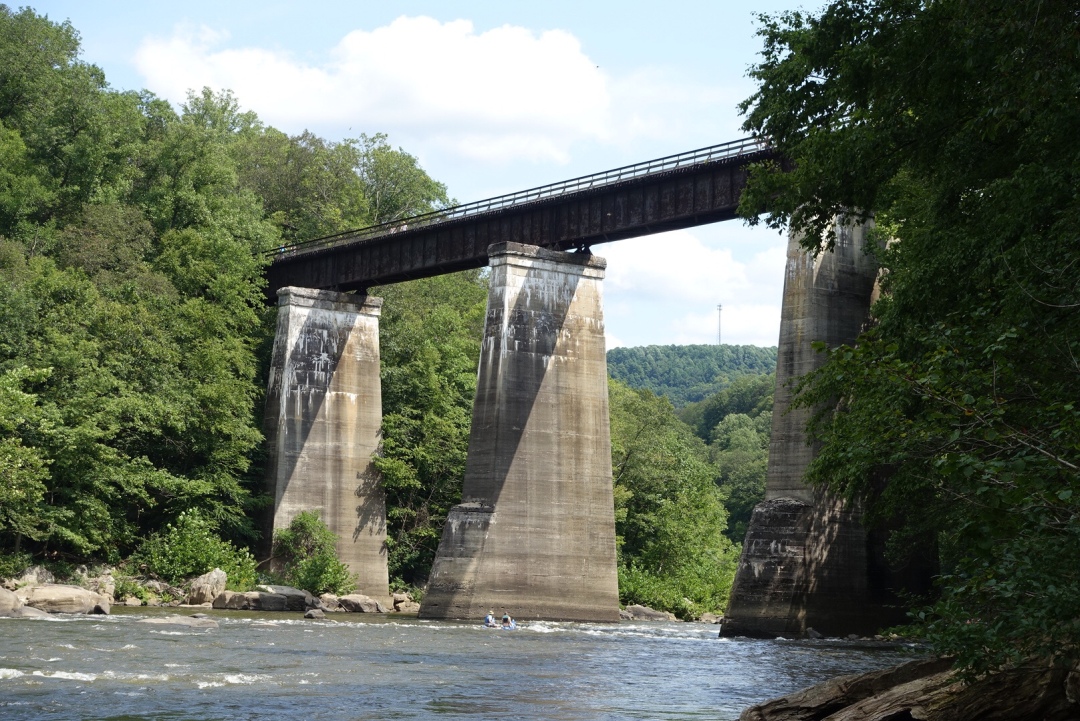 Day 2: Connellsville to Meyersdale—Slowing Down for a Gorge-ous ride (Sunday)

I woke up this morning after a good nights sleep, but for some reason I wasn’t feeling settled. I went downstairs in the Comfort Inn and got myself a cup of coffee and went and sat out on the back patio looking over the river while I drank it. It was a beautiful, peaceful spot, but I wasn’t feeling that way inside, and I didn’t know why.

I thought about today’s ride, about 60 miles, and it seemed quite doable. I was going to be riding through one of my favorite spots on the whole trail, the Youghiogheny Gorge and I should have been looking forward to it.

But then I started thinking about the next days’ ride which is quite a bit farther, 75 miles, and then it hit me: I was moving too fast. I was trying to get in too many miles in too short of a time and it was no longer going to be any fun. I’ve been there before.

When I walked the Camino De Santiago one of the primary things I wanted to learn was how to slow down. I even wrote a chapter in my book about it. And here I was again back at my old habit: rushing, trying to get too far in too little time.

Right then I decided I was going to take an extra two days. I checked my lodging options, changed some reservations and within an hour I had extended the trip from five days to seven days. I instantly felt better inwardly.

I got my things together and then headed out on the trail, a little later than I might have wanted, but much more at peace about the upcoming journey.

The first 25 miles that I rode today was through the gorge, probably the most beautiful place on the GAP. Having decided that I didn’t have to be in any hurry, I took time to soak things in as I rode. The section is beautiful for many reasons. It cuts through the Allegheny Mountains, first Chestnut Ridge, then Laurel Ridge. In between the two ridges is the Ohiopyle Falls, probably the single most dramatic site on the trail, and also a premier white water rafting spot of the east eastern US.

I took my time as I rode the first 15 miles, stopping to take pictures, stopping to dictate notes to myself (frequently) and thoroughly enjoying myself. This section of the trail is so green and very heavily shaded. One hears only the sound of rushing water, the occasional train, whitewater rafters, and the grinding of my tires over the limestone-paved trail. It was just what my spirit needed.

I have been to Ohiopyle many, many times, and since it was mobbed with tourists, decided not to tary too long. I took a picture of the high trestle from below, which required descending a trail down to the rivers’ edge, but it was worth getting the shot. In town I got a cappuccino in a café, ate a few sandwiches, and was on my way.

I moved at a pretty slow pace before Ohio Pyle, but maybe with all the caffeine and food in me I suddenly sped up and got to Confluence in record time. This is where the trail breaks off from the Youghiogheny River and instead follows the Castleman River.

Knowing that Confluence might be pretty crowded and because I wanted to keep going, I rode more quickly for the next 2 1/2 hours, until I got to my destination, Meyersdale. I went through the Pinkerton Tunnel, which was refurbished in recent years and cuts about a mile off of the journey.

The first part of that section outside of Confluence feels very much like the Youghiogheny gorge, with high rock walls, rhododendron and hemlock, but toward the end it suddenly widens out and you find yourself up in a very high farmland plateau. You also cross over a 3,000 foot viaduct as you traverse the Casselman river. I saw fields of corn for the first time since I left Pittsburgh. Industry and coal mining were far behind me now.

Tomorrow I have my shortest ride yet, about 32 miles, to Cumberland where I’m going take a rest day and get some new equipment. Besides being the shortest ride, it’s also pretty easy ride. Within the first hour I will cross the Eastern Continental divide and then it’s a 2% downgrade all the way to Cumberland. I’ll go through three tunnels before I end up in the city I’m looking forward to it.

One thought on “Day 2: Connellsville to Meyersdale—Slowing Down for a Gorge-ous ride (Sunday)”